on the bus with the drunks
A cool thing about having moved to Denmark is that the drunks often are harmless and genuinely kind people, so on the bus yesterday, we needed a space for Mio's now Danish ship like pram. (if you're not familiar with Danish perambulator design: They are huge beasts.) The following exhange took place:

Woman, staring at the green buttons on Mr Mio's jacket: "Little amphibians jumping around."
Me, thinking she's halucinating: "Sorry, where?"
Woman, still staring: "Aren't Naninjas little green amphibiams jumping around the sewer and a giant rat is their boss?"
Me: "Oh! No, they're Teenage Mutant Ninja Turtles, but I see what you're getting at."

I Am Legion - For We Are Many

Quick and dirty post to let you Son Franciscans (Daughters too) to get yourself over to 1AM gallery on 4th November as the A3 custom show I Am Legion - For We Are Many opens.

As mentioned before, my last custom toy will be on display, seeing the mad skills of the other artists, quitting seems a good idea, some of this work is astounding. 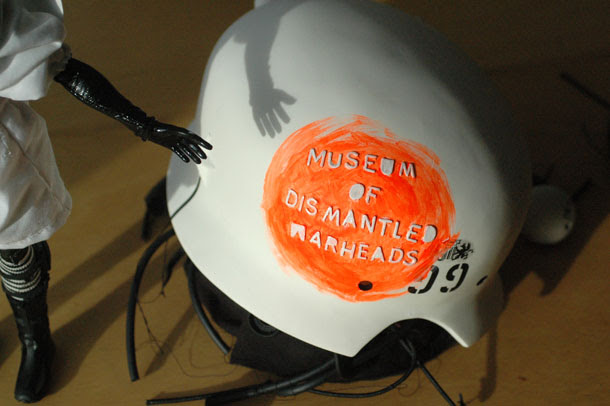 My little scene, showing the museum of dismantled warheads is called "Lemonade" for a number of reason that you no doubt will have figured out before reading this.