designing the other way round

After having created an interactive cover for the printing magazine AGI we had a half-page ad to play around with and decided to use it to promote a secret club, so it seemed interaction was, once again, key as we wanted the ad to be half about us and half us, if that makes sense - we wanted to advertise without stepping out of the creative realm we were advertising, so interaction it was. being pressed for time, we looked to the advent calendar we had made in December for recyclable ideas and we chose to revisit the most minimal of animations: The Thaumatrope.

a minimal bit of planning of format and communication.

Annabelle's sketches for the Thaumatrope.

What would make sense would be to have the illustrator design the image for the 'trope and the the designer do the ad, and that was how we started, but what made this design process interesting was that after initial sketches, we swapped.

Kenn baring his chest to create the thaumatrope.

Not only did we swap roles, we also pretty much swapped the order you usually make these things in, starting a rough layout in Illustrator (of course initial ideas had happened in the sketchbook) before creating the artwork for the ad as a collage, building the ad as an oversized object.

This is obviously a time consuming way to work, but not massively slower and the exercise of swapping thing around benefitted the ad immensely, looking through an issue of the magazine, this will surely stand out, although this is very much an attempt to promote the work we do and ultimately to get more work, we decided not to put our name on the ad. Working under the name a secret club obviously makes that decision easier, but our experience with memory work also suggests that although fewer people who will have looked at the ad will know our name, the ones that have checked out the website following the ad will have a much clearer memory of us - spoon-feeding is not good for your memory, exploration is. Furthermore, this effectively filters out the less passionate and curious members of our target audience, the ones that wouldn't be interested in working with us anyway.

See the finished ad and make the thaumatrope here. (pdf)
Posted by Kenn Munk at 1/18/2011 0 comments 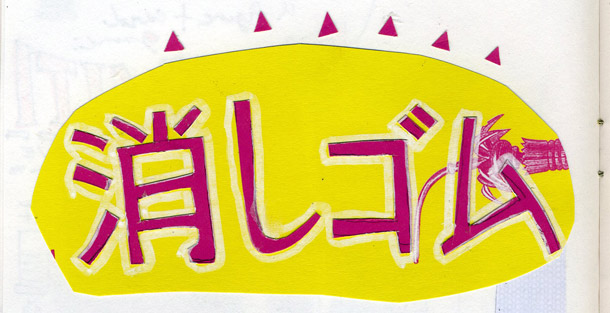 (the above means "keshi gumo")

As so many things do, this started by chance. I'm still not quite sure how, but I think I was researching British folklore and was reading a wikipedia page on Herne the Hunter - I think possibly to see if Herne Hill was connected to the myth in any way. What happened was, all the way down in "Other references" I saw the words:

Herne the Hunter is Monster in My Pocket #59.

I figured it must be the original Pokémon as I remember that being a Japanese abbreviation for Pocket Monster (I love this way of shortening double words) and clicked the link.

What I found was not Pokémon.

What I find is a toy range I didn't know but that echoes my childhood, it's an impressive and bizarrely ecletic range of mythical monsters from Greek, Norse, Russian, English, you name it myth and lore. (And some gods which proved somewhat controversial.) This is possibly one of the best educational toys I have ever seen - My brain is filled with odd bits of knowledge and this was the way I gained it - or one of the ways. I saw and played with something cool, and then wanted to find out more about it. School teachers didn't understand, they would be dismissive of knowledge of Baba Yaga gained at the toy shop - I knew that president Ulysses S Grant was a general in the civil war, not because of history lessons, but because of FineScale Modeler

I'm fascinated by these simple Keshi toys, there's no articulation, the early ones have no paint job, they are small, they are numerous and some of them are just ridiculously, insane crazy concepts - especially the series of figures called M.U.S.C.L.E. (Millions of Unusual Small Creatures Lurking Everywhere). These were based on the Japanese line Kinkeshi and feature wrestlers, but not as we know them, there's one made of tires, there's one made of tiles, there are spinning tops, walkmen-men and bodyless heads, there's a Rubricks cube one and a spring one and something between a sneaker and an alligator - like I said - crazy stuff. (I am waiting for a small bunch of these, so no photos yet, here's a pic from the ebay auction I won, courtesy of ebay seller cisavtr.)

Keshi figures, as they are called, originate in Japan and they make me think of Netsuke - The V&A has a beautiful Netsuke collection if you're ever near London and even though these cheep, mass produced rubbery plastic toys are far from netsuke in craftsmanship, there is still similarities and I see keshi as miniature sculpture. I like the iconic qualities of some of the Monster in my Pocket figures and the shear ingenuity of the M.U.S.C.L.E. figures is mind blowing.

New keshi are still being produced and out shopping I found Gormiti and bought one. (The one on the far right in the picture.) I'm very precious about my childhood and in my unfortunate, but usual way I thought that these were going to suck, NOBODY dares to be that kind of Sneaker/Alligator, man made entirely out of tires crazy in mainstream toys, i thought, all this goes through focus groups and play tests and has to pass grown up who, when you'd show them your new Amanaman figure will tell you he looks horrible or doesn't make sense. I am happy to say I was wrong. The Gormiti figures are (sort of) based on the elements. Fire is Lava, there's a Forest element and some of these designs, especially the forest ones are almost as crazy as the ones from the olden days, there's a guy made of rotting leaves, there's a tree trunk fella and so on.

Of course, these new ones lack the charm of very simple production methods, they are glued together by several parts and they have paint jobs, but they are still interesting. The figure I bought had two small metal pins under one foot and if you place him in a sacred temple playset, he will apparently speak. (It begs to be taken apart.)

There's a gaming element to these figures too and that is something that I'll explore further soon as that could prove to be every bit as educational as Monster in My Pocket.