But it's also an exploration of an idea born from a mistake: When I made the first in incarnation of the website, it was merely a splash, but I wanted a minimum of content so I added a pdf paper kit that you could download, but made a typo thereby creating a broken link, A secret club is about play and creativity, so this broken link became a riddle and I warmed to the idea of designing in this "wrong" way - you could easily figure out that "downolads" would mean "downloads", in fact, you might go one further and have a peak inside the "downloads" folder - you could add content here that would only be accessible to curious souls.

The idea of designing riddles that were based on very basic functions in the browser instead of clever flash could easily be expanded, URLs would not be clickable, you'd have to type them in, you could have QR codes that directed your mobile device to a site with instructions for you to type into your computer's browser - leading somewhere not accessible by smartphone, you could have text the same colour as the background, you could have several windows that would have to be placed next to each other in order to make sense. This would make the web more manuel, it would be walking by asking directions instead of by sat nav. It would be going to the library instead of googling. Not that I don't like sat nav or google, in the same way I don't dislike beer, I just like to drink other things every now and again.

When I designed the story for a secret club I thought I'd use these tricks, but it didn't fit in. The story is a fighting fantasy style mini-adventure that had been tested on Twitter and it involved you embracing a setting where you walked around a flat. Adding difficult luddite navigation would take you out of the fantasy, there are still some hidden features and harder to work out tricks, but they all fit within the concept of the story.

Furthermore, I was worried about the user, whether he/she/it would be able to figure it out and that's the really dangerous bit, something in me wanted to make this accessible to everybody, cater to the lowest denominator and that is a horrible thing. If we are are so obsessed with things having to be easy, we are going to be spoiled, if you're spoiled, you get lazy and ultimately you'll forget how to solve problems.
Posted by Kenn Munk at 11/24/2010 0 comments

Bag a bargain (but more importantly: Bag a bag) 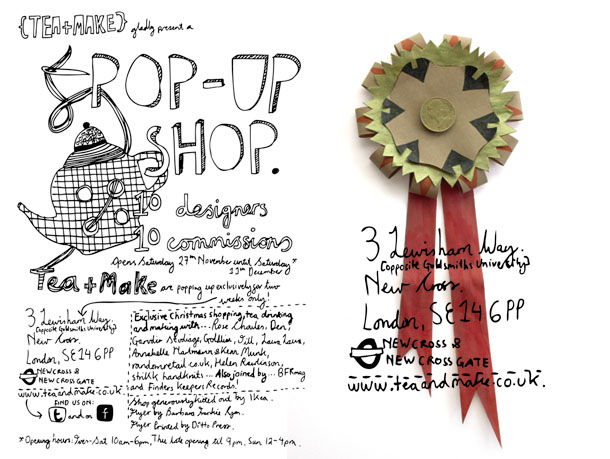 Opening Saturday 27th November and closing again 11th December is the Tea and Make pop up shop in New Cross.

We'll be selling Antlor kits and stuff like the Son of Ar and our The See Screenprints are going for, well, next to nothing. Fellow a secret club culprit Annabelle will also be selling goods there, including miniature shrines, porcelain pieces and Qee figures 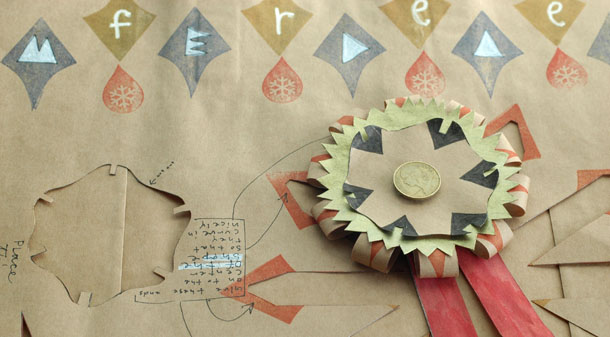 With every purchase (if you're fast) you get a special paper bag - all participating artists/designers have been asked to design ten and ours were done as a secret club.

This, of course, means play and craft so our bags can easily be transformed into either a monstrous finger puppet (the small bags)

Or a medal for the big bags.

Only after having made these did we realise that the designs had to be the same for all bags and we're sorry that we've messed with the system, but this way you'll get a lucky bag style lucky bag.

These bags are re-visits to some of the projects a secret club have worked on through 2010 and bring back great memories of making medals with kids at Port Eliot Festival in Cornwall and monsters with grown ups at V&A.

The medal making will get a another revival very soon in Scandinavia - point your eyes here.

Please drop by to raid our stock so we can get space for new products.
Posted by Kenn Munk at 11/20/2010 0 comments