Email ThisBlogThis!Share to TwitterShare to FacebookShare to Pinterest
Labels: keyhole

Studio tour: The stuff around us
We have finished (well, we still need to make a movie) our "Spirits of the Forest" project, school's out, so no more teaching and most clients are away on holiday so let me use the time to show you round the place, you see, we moved about 4-5 months ago and sadly the new place didn't allow for a separate studio so we've engaged in a strict Not-too-much-stuff regime as the boundary between work and living has been blurred. This doesn't mean minimalist Scandinavian living like in the mags - objects feed our brains, so here are some objects that made the cut:

Don't be fooled, the clipboard look neat here, but the truth is that the photo was taken RIGHT after they got up in that old magazine rack. Also, we have more than one magazine but one is allowed in the rack at a time - at the time it was an issue of the always mind blowing Raw Vision. Right now, there are two issues of It's Nice That (3+4), Latest issue of CUT, an old Lodown, a print sample of a parenting mag and The Guardian from June 11th (We miss The Guardian so Chris of Garudio Studiage with whom I used to teach at Central Saint Martins sent us a copy back in June - If you want to send us a copy of The Guardian in exchange for anything bar our souls, please get in touch.

The candle was Mr. Mio's christening candle - a German tradition. The standard ones were pretty awful in that religious way so we made our own.

The glasses were from an optician that closed shop, they're carved in wood and the hands are from an old glove factory, someone I shared studio with once got them for a project.

Ah, the odd mix of light switches and plug sockets from different eras , the fake Pikachu one and the feather one are pretty random, the tache one was in our old studio too.

Wallpaper archeology.
I stripped of some of the newer layers of wallpaper - probably in impulse stemming from my childhood. On that wall are a couple of jumping jacks Annabelle made and a big green F that I found in a town called Ebeltoft which sounds a bit like someone the Moomins might know.

A mirror that still hasn't been put up reflects Annabelle working on something by the window that hosted The Sage, The Basil, The Rosemaries, Helen's Tomato, Pale Dill, Father Thyme, Dead Hot Chili Papas and a toner cartridge waiting to be sent to the recycling place.

That's it, I need to design some stickers for a secret club now. And you need to scoot over to that same club to join the mailing list, we have good things coming. Including stickers.
Posted by Kenn Munk at 7/21/2011 1 comments 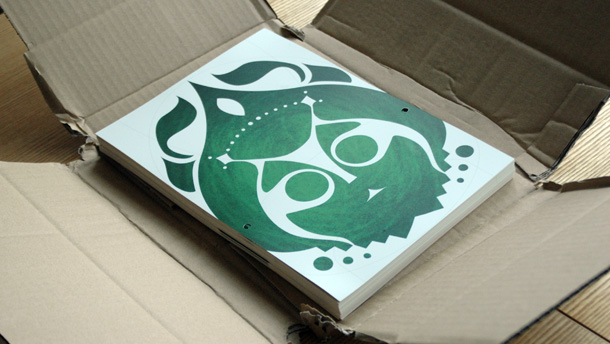 De rå masker er landet fra trykkeriet og siden billedet blev taget er de blevet maskificeret.
The raw masks have arrived from the printers and since the taking of this picture, they have been maskified further."
Posted by Kenn Munk at 7/14/2011 0 comments

The forest spirits go to the cinema for free

On 16th July, a secret club invites all children over the age of 7 to be transformed into forest spirits and embark on a magical adventure.
At the same time the spirits, showing masked faces and curiosity, clean up a little after the humans and meet some of the other spirits of the forest. The day after, all are invited to the cinema to watch the beautiful Japanese animation 'Spirited Away'.

It is free to take part, but you must sign up early at www.schhh.org as there are only limited spaces available.
Posted by Kenn Munk at 7/05/2011 0 comments

Shane Brox at Den Gamle By

Let me introduce you to a man that may have turned thousands of kids to scouring the streets for trash - or what other people call trash. His name is Shane Brox and I first came across him a few years back around Christmas when I was visiting my family in Denmark. In Danish TV Mr. Brox had a show where he told stories with an eclectic mix of mismatched toys and sets + characters made using his trusty hot glue gun and found objects.

It's no surprise that I like anyone working with reclaimed materials on national TV, but this guy is good - not just with the glue gun, but with his stories too.

Now I'm living in Denmark and Shane Brox happens to have a show at Den Gamle By in Aarhus.
There are slight critiques of society in this show, little snidey remarks - mostly about paranoia - that add another layer, but also just that kind of weirdness that sits well with my brain.

According to what I've heard, he's been given free access to a huge archive of toys owned by the museum, this might not be the case, but if so, that's a major and interesting step for a museum that usually insists on historical accuracy in it's displays. (Except a few - I don't think a 1864 bakers mostly sold cake for instance.) This kind of stuff is the way to get people interested: Show them wonder, not facts. If it strikes a chord, they will look for/at facts themselves.

If you're anywhere near, I recommend this, it's one of the few little ways to get your mind blown in Aarhus.
Posted by Kenn Munk at 7/04/2011 0 comments